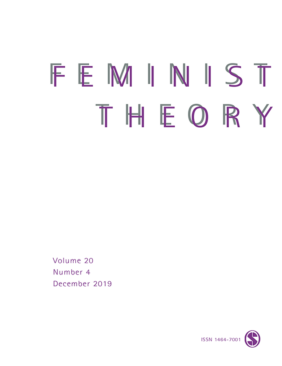 The term ‘lesbian ghost’ has a double meaning for us. It points to the sombre or playful nature of the repressed or sidelined both in relationship to feminism and elsewhere and when. But it also points to the ghosts that haunt lesbian identity, community, politics and theory: the unacknowledged subjects, practices and histories that lurk behind, beside or beneath dominant lesbian meanings. A lesbian ghost story – in our minds, and in the imaginations of the authors in this special issue – keeps the category ‘lesbian’ perpetually open; it is a lever to pry open other histories, and it is subject as much to its own hauntings, its own macabre attachments to singular accounts of the past. Who are we following, when we track our lesbian ghosts, or ask what or who ghosts ‘the lesbian’?

Im/possibilities of refusing and choosing gender

American lesbians are not French women: heterosexual French feminism and the Americanisation of lesbianisme in the 1970s.

‘Where might we go if we dare’: moving beyond the ‘thick, suffocating fog of whiteness’ in feminism

The greatest story ever written: excerpts from an unpublished novel

Haunted by her: lesbian feminist ghostly drags on representation and reception

Queer of colour haunting in London’s arts scene: performing disidentification and decolonising the gaze. A case study of the Cocoa Butter Club.